Swift is getting popular programming language for developing iOS apps these days. Being a type safe language, it’s important to focus on code styling and conventions of the Swift code. SwiftLint is an open source tool to enforce Swift style and convention. SwiftLint allows us to enforce code style rules and stick to it during the development of iOS apps. There are various blog posts about integrating SwiftLint into the development process as well as SwiftLint itself has good documentation about its usage, however, there are some tricks we can use while integrating SwiftLint into Continuous Deployment pipelines. We will cover some of the tips for setting SwiftLint on CI server and embedding it into build pipeline. Note that, this post assumes that you have selected rules and configured   .swiftlint.yml  files. Let’s see how to integrate those rules on CI servers.

Note: Source Code for this post is available on Github SwiftLint-CI repo and TravisCI build is available here

There are four methods of installing SwiftLint as mentioned in the documentation. It’s important to select the method of installation on CI server as each of them has its own pros and cons.

The best idea is to pick the CocoaPods way of installing SwiftLint.

This will apply SwiftLint for all the targets mentioned in the targets_to_lint array once we run pod install  command.

SwiftLint being a static analysis tool, we have to run linting before running any other development task like building, testing or archiving. This will help us to fail early if there are some issues in code quality. We can have separate build phase in our CI pipeline to run the static analysis with SwiftLint. The script we want to run is

This makes sure that correct SwiftLint binary is getting executed as part of the build script rather than executing the pre-installed binary. In our example app, we have configured separate phase for SwiftLint. Check out the .travis.yml

The iOS developers mostly work with Xcode, however, CI servers have to run some automated scripts on the server to run the development tasks. In order to make both developers and CI happy, we need to find balance how to run SwiftLint without making them upset. There are a couple of things, we can focus on while development and CI phase like Xcode build phases and reporting of SwiftLint results.

SwiftLint works perfectly when run from command line however, iOS developers would love to integrate it with Xcode. In order to integrate it with Xcode, we need to add run SwiftLint as part of build phase of the targets but we don’t want to repeat the execution for each build on CI. We can add run script in the build phase smartly so that we can still run the SwiftLint from local Xcode as well as on CI.  We can achieve it by creating CI environmental variable (most CI server has this similar variable already set) and adding conditional execution script in the build phases of the target.

This will make sure that there won’t be repeated execution of swiftlint   script on CI server but developers can still run it from local Xcode. 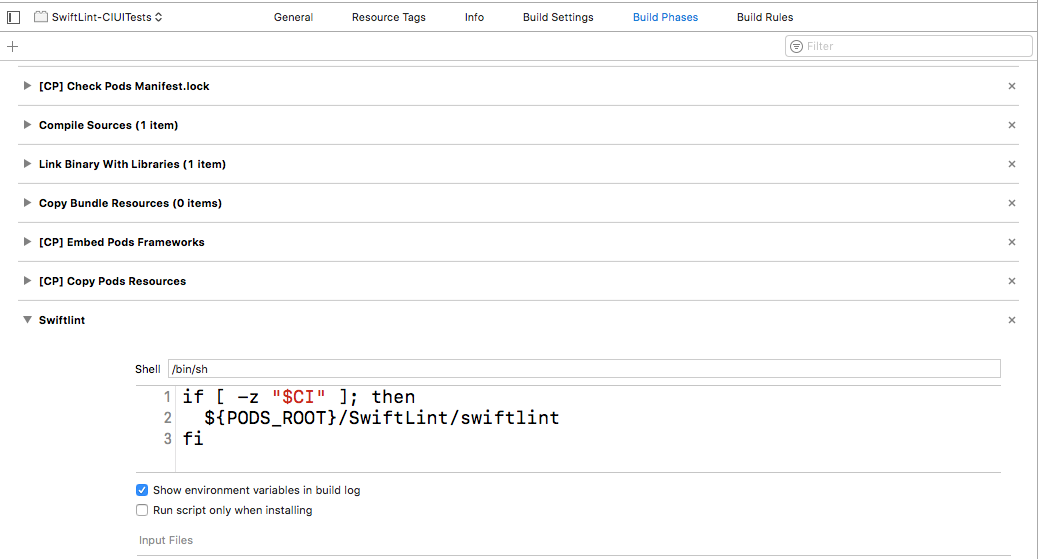 SwiftLint has different reporting types including xcode, json, csv, checkstyle, junit, html and emoji. The default reporter type is ‘xcode’. It’s a good idea to keep the xcode reporting for the local execution and gnerate fancy reports using html or junit on CI server.  We can change the reporter style using

Fastlane has become a very popular tool to automate iOS development tasks for continuous deployment. Fastlane comes with various tools and actions to perform the specific task. Fastlane has an action for SwiftLint which looks great but it’s not required to execute SwiftLint as Fastlane action. If we using SwiftLint with CocoaPods, then actions must set an executable  parameter, pointing to the binary located at ./Pods/SwiftLint/swiftlint  path. Otherwise, Fastlane will pick default binary if there is any. The SwiftLint Fastlane config should look like

This will make sure that we are executing correct binary of SwiftLint with Fastlane.

Now that, we have seen some tips to configure SwiftLint on CI server. In the next post, we will see step by step guide to setup SwiftLint on TravisCI build stages for iOS.