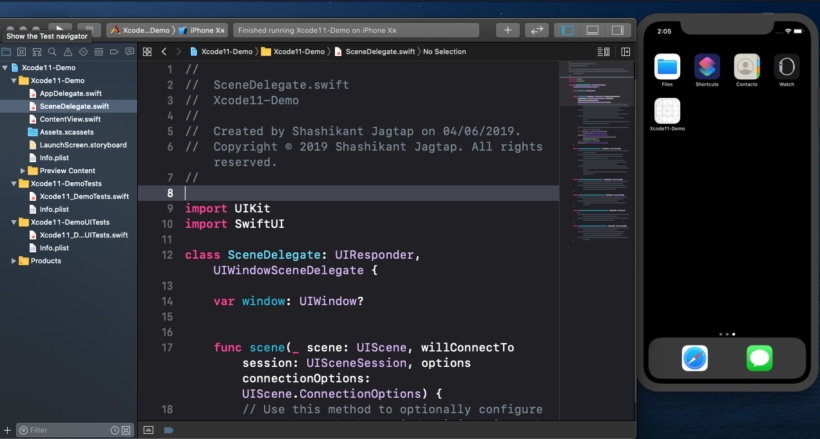 Apple announced Xcode 11 at the WWDC19 event. The official release notes covered what’s new in Xcode but it’s worth giving a try to Xcode 11 with macOS Catalina. The key features of Xcode 11 include mini maps for code navigation, Swift Package Manager for iOS, macOS and watchOS.

Xcode 11 has great minimap to navigate to the source code easily within a long file. This feature available in another text editor like Sublime, Atom but was missing in Xcode. The app developers will now get minimap in Xcode too.

Apple announced the new framework SwiftUI to build the apps with less code. With Xcode 11, developers can build apps using the SwiftUI framework. When you create new app Xcode will ask you to enable the SwiftUI support.

Once enabled the app will get full support of SwiftUI features from macOS Catalina.

You can create the black test plan or as per the scheme or custom plan. There are other ways to create test plan from Xcode product menu. Now that, you can create a different configuration for different types of the tests.

In the image above, we got a couple of test plans to execute tests e.g pull request or master.

An iOS app was using third-party tools to manage the dependencies like CocoaPods or Carthage. Now Apple has added official support for managing dependencies. The swift package manager can fetch repos from Github. You can add support for the SwiftPM packages from Xcode -File-Swift packages- Add Swift dependency.

Once Xcode is connected to the Github then you can search the packages and use in the repo.

Once the project is fetched then, Xcode will link the frameworks and shown in the project navigator.

There are so many features available in the Xcode 11 as mentioned in the release notes that we will cover later this week.

Get the latest Xcode and Have Fun!