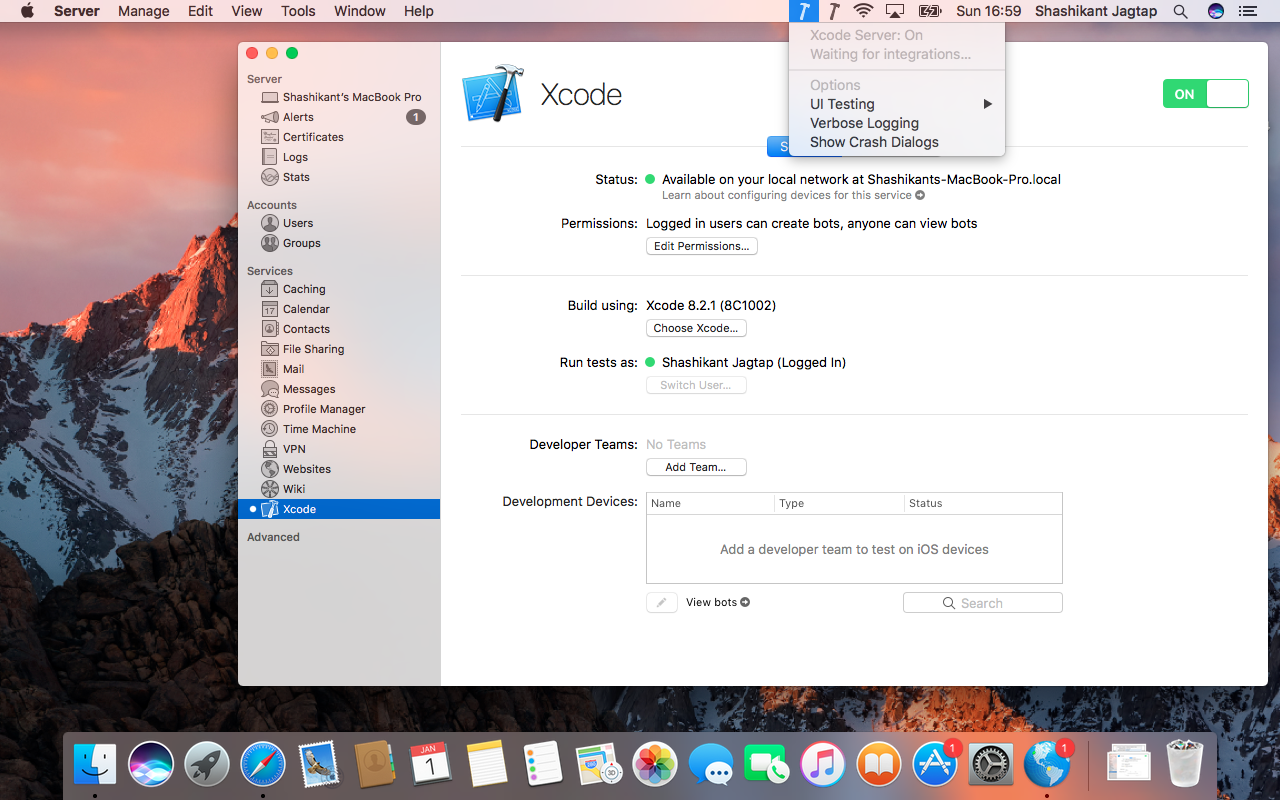 Apple has very comprehensive documentation on Xcode Server and Continuous Integration with OSX Server (app) and Xcode Server (Xcode within the server app). You might be wondering what’s the point of this post if everything is documented in the guide. However Apple’s guide still reads as OSX Server than macOS Server but Apple has released new macOS Server (5.2) with some improvements in the Automated Xcode Builds. Anyway this is small tutorial aims to setup a Mac to run as a macOS Server with Xcode Service and Setup basic Xcode Bots for the macOS Server with Xcode 8 to perform Continuous Integration. We will cover

This means using there are some significant changes in this release which can affect current CI system with Xcode Server. New macOS  Server will have following features.

This isn’t new but Xcode 8 will now allow us set environmental variable without creation of extra schemes.

macOS Server will now have two types of triggers, script triggers and email triggers. We will have now control over how to set email contains.

Xcode Server will send email to person who broke build. We cab now configure bots instead of changing code.

Xcode Server now re-integrate the your project if it fails using same revision. It also prevent blaming for the broken build.

Xcode Server will have now it’s own user called Xcode Server which give you full control with password as any normal macOS user. Setting new user seems fairly easy in the Xcode Server.

Now that, we will see how to setup macOS server for our fresh Mac or Mac Mini.

Assuming, you have already downloaded Xcode 8 on the Mac also downloaded macOS Server 5.2 App which might cost some money but if you already have developer account then you might able to redeem that product for free.

Once downloaded, we can launch “Server” app from the Applications Or Mission Control. macOS Server will start

Once launched it for the first time, it will show you entire tutorial how to use new macOS Server for all services. 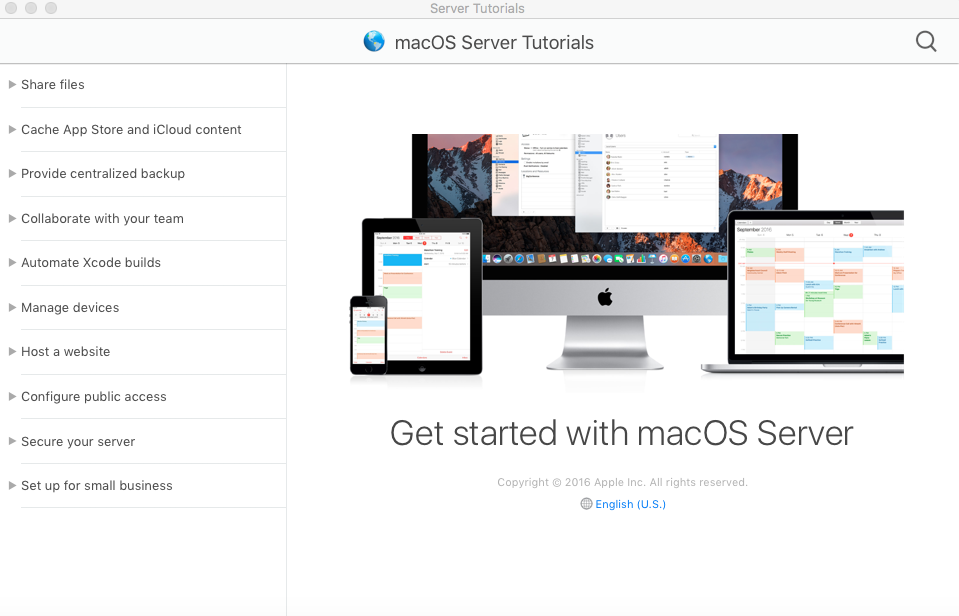 You can read more about macOS Server services in the tutorials.

Next step is macOS Server will ask to “Choose Mac”, select “This Mac” as we are setting the same Mac for Xcode Server 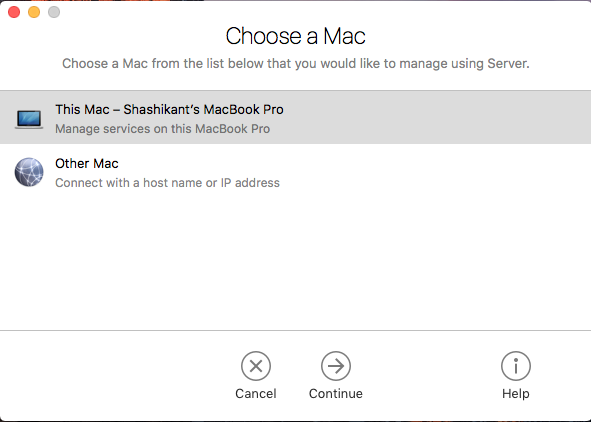 Now next step is to ‘Select User” to run Xcode Bot Integrations, we can use same use which is logged in but we have a option to use another user ‘Xcode Server”. There will be an option to create new user. 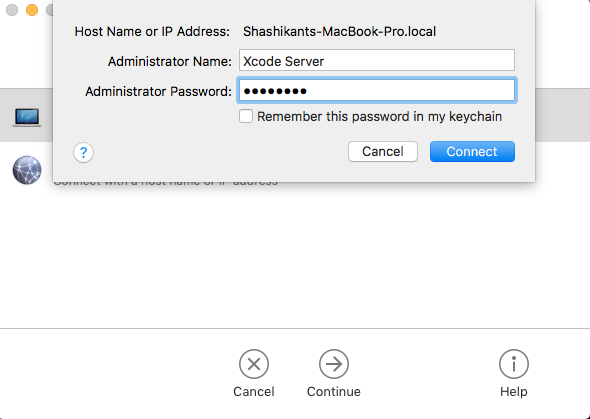 We will use same user to run test to avoid user swapping. My username is “shashi”

Now, macOS Server will take some time configuring and then we will be able connect to macOS Server. 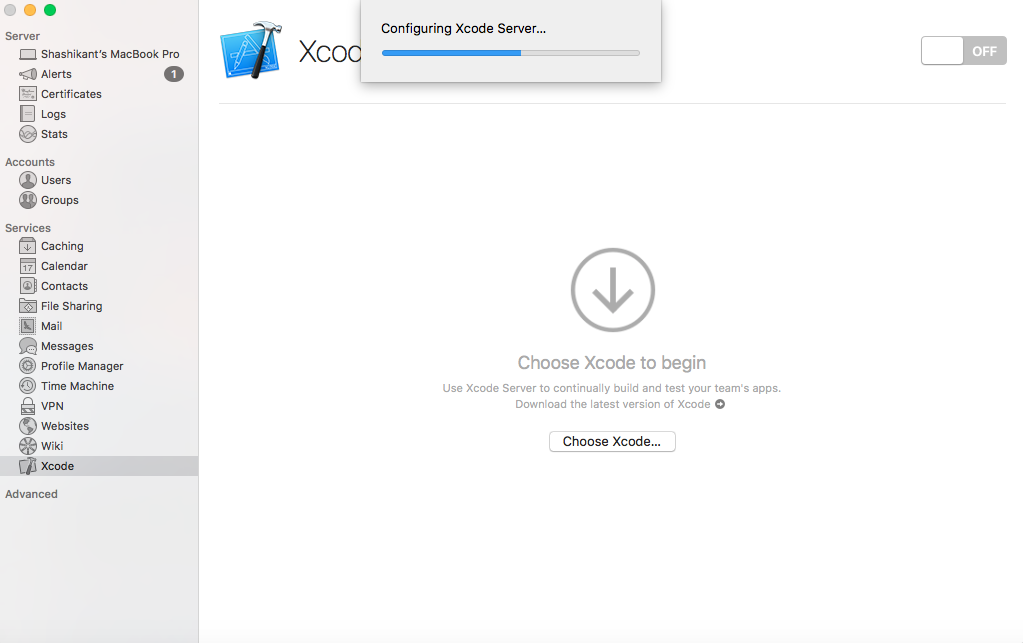 Now we can select use here to run out test or Integrations triggered from Xcode “bot”. We have already created “Xcode Server” user but it can be any user. We can switch user if we with to. It isn’t good idea to give that user Administrative rights because it’s not required.

Now it’s time to configure details of our development team with our Apple ID. We need provisioning profiles, certificated to configure this. We can add real devices to the Server as well. Once provisioned devices connected to the Mac it will start appearing in the device list.

Assuming you are team of developers working on the GitHub repo. We can add GitHub repo to our Xcode Service. We can setup ‘Repository Access” with SSH or HTTP. “Repository Creators” and finally there is button to add multiple repositories to be hosted on Xcode Server. You can do it from “Xcode Bot Setup” as well which we will cover later in the post. Let’s add Swift Package called “XCFit” as Git Repo

Turn on Xcode Service by Clicking on the button once we have everything setup. You should see that in the notification service as well as shown below.

At this stage, our Mac with macOS Server will be accept any Integrations triggered by the Xcode Bot. Now that, developers can create Bots as per their need and our Mac will be capable of running those integrations.

We have just completed all the nessesary setup to run Xcode Bot on our Mac. It’s time to share the server details to development team so that they can configure macOS Server on individual Xcode installed development Mac. The details are on the main Server tab. Details will be

The developers will use these details to configure the local development Xcode to connect to the Xcode Server.

Configure Xcode to use Xcode Server

In order to add macOS Server to Xcode, launch the Xcode project you are working on and Select “Xcode -> Preference -> Account” at the bottom, click on “+” sign to see  “Add Server” option. 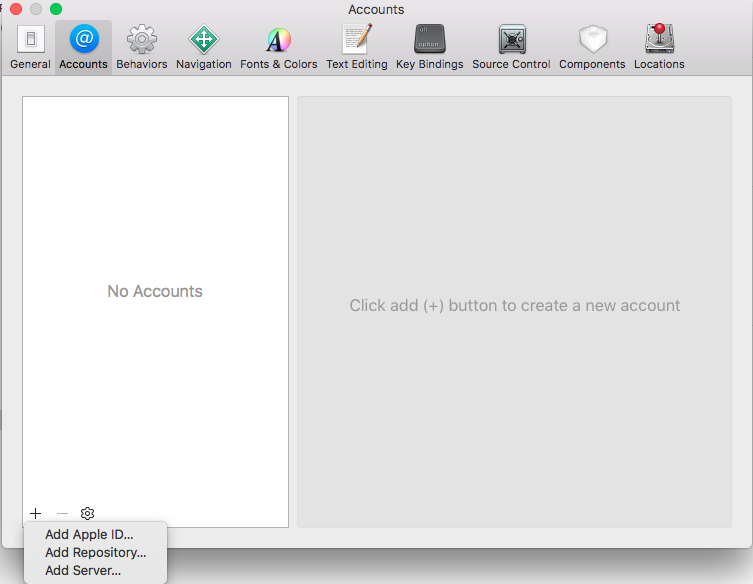 There will an option to select a Server or connect to host. Select the Server that we have just configured.

Once user is successfully added, we should see screen with Server status “ON“. It should look like this: 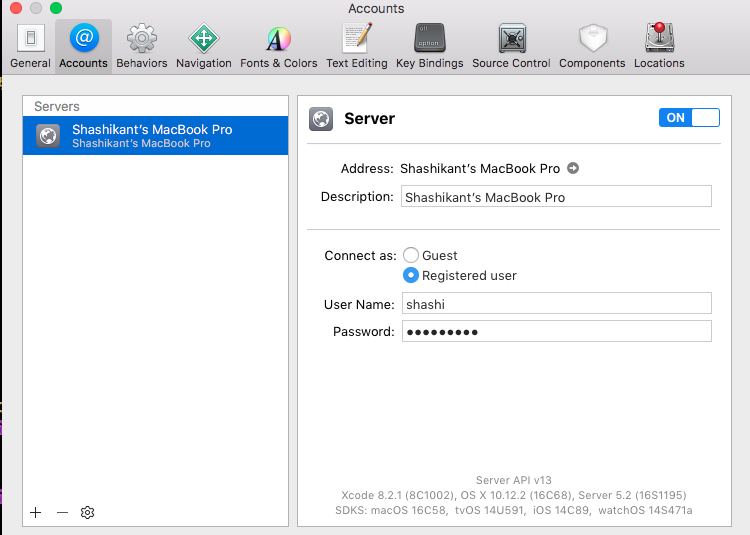 At this stage, we have configured our local Xcode to use macOS Server. We should now able to create Xcode Bots.

Xcode Bots are similar to the Jobs in Jenkins or Projects in TravisCI. We have to configure set of automated instructions to checkout source code, build, test and notify etc etc. The benefits of the Xcode Bot is that we can configure the Bot straight from the Xcode. We can see all the created Bots in the ‘Test Navigator’ of the Xcode. We will use “XCFit” GitHub repository to configure bots.

Next step is to add Github Repo to the Bot. We have to add Git Repo with SSH. Xcode will ask you to trust the identity repository. You have to select “Trust” and use credential of existing SSH Key 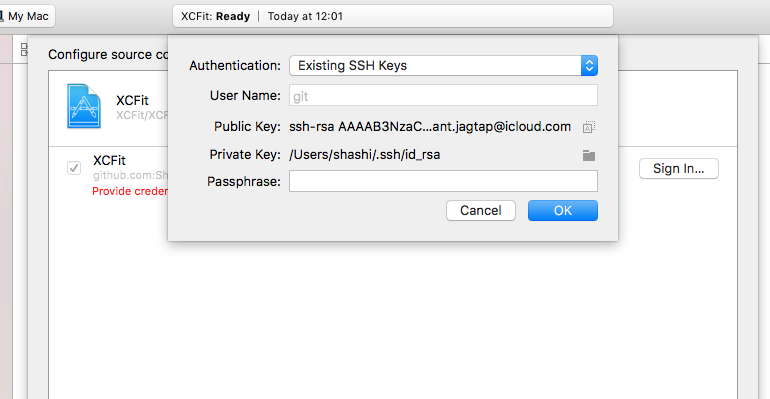 Once successfully authorised, we should able to configure build.

The build configuration is main stage to configure what we want to perform as part of the build. Xcode Bot has some options like 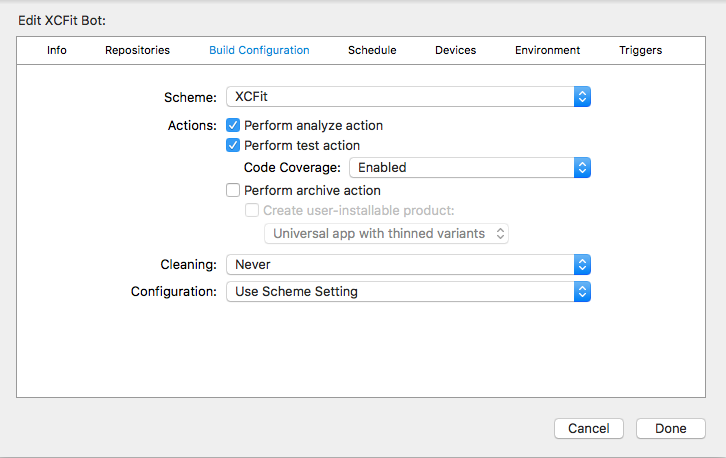 That’s it to build our Xcode Bot.

We can then Schedule the build whenever we want to build Xcode bot. There are three major options to build Or Integrate Xcode Bot.

There is an option to select the device to run an integration on. We can run test on real device or simulators. The provisioned devices attached to the Xcode servers will appear on the list. We have various OS combination to run integration on like macOS, iOS, tvOS and watchOS.

In our case, we don’t any iOS device or simulator as it’s Swift package and can be run on Mac. In case we are using iOS App then we can select specific device or iOS Simulators. Now we will select “macOS” for this Bot.

There is an option to use custom environment variables or use predefined variables to perform integrations. Full list of Xcode Server environmental variable is here. In our case, we don’t need to select any variable.

Triggers are set of actions to be performed before or after Xcode Bot Integration. Xcode Bot has following available triggers

We don’t need to select any trigger for our XCFit Bot. You should now see message that we have successfully configured our Bot.

We wil also have option to view “Tests”, Code Coverage an Logs.

Now let’s watch everything we described in an action. You can watch Youtube Video about this here Or watch animated gif.

Congratulations. We have successfully configured Xcode Bot and Performed Integrations.

Hope this article is useful for you setting up Xcode Server as Continuous Integration Server for iOS. Thanks for reading. Let me know if you have any difficulties setting that up. Happy CI