Core Data is one of the most popular frameworks provided by Apple for iOS and macOS apps. Core data is used to manage the model layer object in our application. You can treat Core Data as a framework to save, track, modify and filter the data within iOS apps, however, Core Data is not a Database. Core Data is using SQLite as it’s persistent store but the framework itself is not the database.  Core Data does much more than databases like managing the object graphs, tracking the changes in the data and many more things. In this short post, we will see how to save and retrieve data using Core Data frameworks. 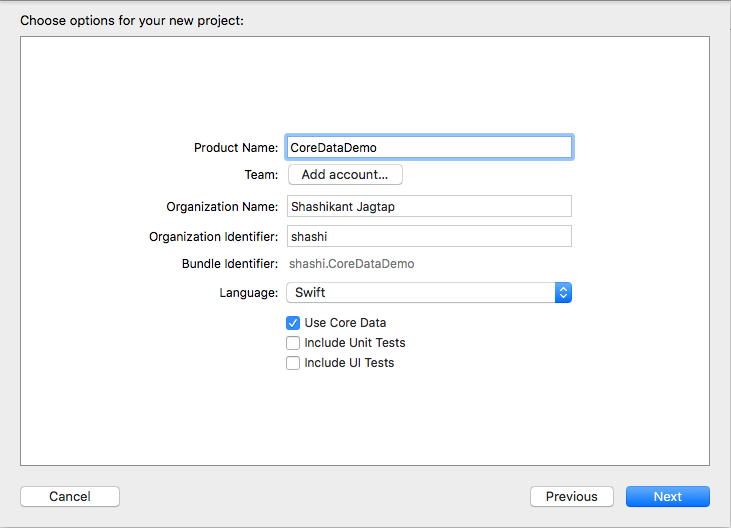 Now that, we have created a demo project with Core Data support. There are two notable changes in this Xcode template we can easily observe which are

The Core Data Stack code inside the  AppDelegate.swift  has clear documentation in form of comments but in short, it set up the persistentContainer and save the data if there are any changes. As AppDelegate is the first file that executes as soon as app launched, we can save and fetch the context the from the Core Data Stack.

The new file CoreDataDemo.xcdatamodeld acts as the model layer for the data that we want to save. We can easily ad the entity, attributes and relationships from the UI as like any other relational database.

Now that, we have modelled our data in the Users entity. It’s time to add some records and save it into the CoreData

Let’s do everything inside the ViewController.swift  and viewDidLoad()  method. As we know that container is set up in the AppDelegates so we need to refer that container.

We need to create a context from this container.

At last, we need to add some data to our newly created record for each keys using

Now we have set all the values. The next step is to save them inside the Core Data

The methods for saving the context already exist in the AppDelegate but we can explicitly add this code to save the context in the Database. Note that, we have to wrap this with do try and catch block.

At this stage, whenever we run our app the new entries will be added to the Core Data records.

The process of fetching the saved data from is very easy as well. It has the following task

We can fetch the data from our Users entity using following code.

This will print the value of username from the Core Data. That’s it! Now that, you have successfully saved and fetched data from Core Data.

Well, this isn’t enough to save and retrieve data, there are many complex things we can do with core data like modify, delete, tracking data changes, adding Predicates and complex relationships od databases. As you use more Core Data things get more complex.

The source code for this demo app is on Github as CoreDataDemo repository. You can clone the repo and play with Core Data.

Have Fun with Core Data!