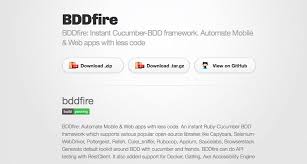 The key benefits of Behavior-Driven-Development (BDD) practices are communication enhancement and customer satisfaction. You can read more on that by Dan North and Gojko Adzic. Perhaps the biggest practical challenge that stands in the way of reaping those benefits is the burden of provisioning, installation, maintenance of requisite complex and fussy infrastructure and setting up reliable test infrastructure. Cucumber is one of the most popular BDD framework available in the market to achieve the benefits from BDD practices. The problem is software teams seems to spend lot of the time setting up Cucumber and necessary toolkit around it. The management has to decide the tools and engineers have to research all the available tools to support agile practices like CI, code quality, test reporting, parallel execution, devOps integration. The process of getting BDD framework in a mature state become lengthy. Obviously, such approach would be time consuming, inefficient and costly. In this post, let’s see how to get up and running with 3 simple command to setup Ruby-Cucumber based BDD framework with Docker support using the BDDfire.

BDDfire is an instant Ruby-Cucumber BDD framework which collectively install BDD supporting tools  and get you up and running within a minute. It is a Ruby library that creates skeleton for the ruby Cucumber Behaviour Driven Development (BDD) framework. BDDfire will create all the directories and required files to support the latest open-source libraries in the Ruby-Cucumber framework. You can read about BDDfire here

Cucumber is a very popular BDD framework. Cucumber become more effective when it’s plugged with other open -source libraries. Sometime we miss most of the useful libraries to be used with Ruby-Cucumber. BDDfire supports lots of modern open-source libraries  so that we won’t miss new trends in the world of Ruby-Cucumber.

BDDfire is motivated by few simple facts which could save organisation spending lot time and money on setting up frameworks to enable BDD.

With BDDfire, we can go from zero to complete BDD framework, by running just three simple commands

Let’s see how to get up and running with Cucumber style BDD framework within few minute.

In order to get started with BDDfire, we have to make sure that following packages are installed on machine.

BDDfire is a RubyGem and it can be installed using

If you are using system Ruby then you have to run the command using ‘sudo’. This will take bit of time and download all the required ruby libraries. Once finished without error, you should be able to use ‘bddfire’ command. Now run ‘bddfire’  command from terminal to see all available options

This will create ‘cucumber’ directory and setup all the framework within that directory. BDDfire will create all the required files for our framework.

Congratulations ! You have just setup BDD framework with all the basic toolkit to cover code quality, browser/cloud test, API test and Docker integration. Let’s explore how to use it.

Now that, we have installed our Ruby-Cucumber framework with all files and directories. We can run our first headless scenario using  Poltergeist.

You won’t see browser as scenario is executing within headless browser PhantomJS however we can take screenshots and debug information by tweaking Poltergeist setup in the ‘features/support/env.rb’ file.

In a similar way, we can run the scenarios in headless browsers like PhantomJS using Poltergeist as Capybara driver. The Poltergeist driver is already setup for you in ‘features/support/env.rb’ file. BDDfire also created a profile to run scenarios with headless browser. You can see your scenarios executed but you won’t see any browser launched, this helps to run automated Cucumber scenarios faster than with real browsers.

There is one more pre-defined scenario for running API Test which checks JSON response from Github. We can run that test using

BDDfire gives you an option to run tests in third party cloud testing services like SauceLabs, BrowserStack and TestingBot. In order to use those services, you need to create an account and get an username and assess key. There are various Rake tasks to the run tests in the Cloud Testing services like SauceLabs, Testing Or BrowserStack. We just need to plug our username and API key in the ‘feature/support/env.rb’ file. You can then use that access key in ‘features/support/env.rb’ file to run the automated Cucumber scenarios. If you are running tests in the BrowserStack, you will have all the stacks defined in the ‘browser.json’ file. We can use any of them. We need to configure BrowserStack username and access key in the driver configuration.

Using the same setup, you can run automated scenarios in the other third party testing services like SauceLabs and TestingBot.

BDDfire gives you an option to use Relish as living documentation tool. Relish publishes feature files online so that the whole team can read and access them. In order to use Relish, you need to have a Relish account and API TOKEN that can be obtained by visiting ‘https://www.relishapp.com/api/token‘ after logging in.

BDDfire creates a file ‘.relish’ where you need to paste your token. Now you can publish your feature files online by using

BDDfire creates a ‘ci_script’ file to run automated Cucumber scenarios on continuous integration server like Hudson and Jenkins. It will clear the workspace by deleting old reports, creates YARD documentation for your project and runs Rubocop and Cuke_Sniffer before executing your scenarios. You can also change this file to suit your project need. You can execute this bash script on any CI by passing one of the rake task

BDDfire allow us to use predefined steps so that we don’t have to write more code while writing cucumber steps. BDDfire has following predefined steps which can be used anytime during your project. This is major advantage if test engineer is non-technical, he can write automation code using those steps.

You can use Browser based steps to run scenarios within browsers like Google Chome or Firefox.

Docker has became so powerful tool in the world of continuous delivery and continuous deployment. Software team has to provision all the infrastructure to run as a docker containers. It would be awesome if we could able to run Cucumber scenarios inside the docker container. Fortunately, BDDfire have done all that provisioning work for us however we can only run PhantonJS/Poltergeist based headless scenarios within Docker Containers. BDDfire will

Assuming, you have Docker installed, you just need to need to execute docker rake task

This will take long as Docker images will be built from scratch. Be patient and watch the BDD scenarios running inside containers at the end.

We can mount the volume of our project repository and docker containers to generate and share test reports. You can modify ‘Dockerfile’ and script ‘docker.sh’ according to your need. In this way, we can run our BDD scenarios inside Docker containers.

BDDfire will also support non-functional testing like load/performance testing with Gatling and accessibility testing using Axe engine which we will cover separate article.

We have seen that process of setting up an BDD test framework become very quick using tools like BDDfire. We can set entire framework with code quality, browser testing,  cloud testing,  API testing and docker integration by running 3 simple commands. Now that we can spend time writing BDD scenarios not the framework.