The ‘parallel_test‘ is a awesome rubygem to speedup your Rspec, Cucumber and Test Unit scenarios. Parallel _test also allows us to run Cucumber into different process and speedup the entire execution. In my previous blog post ‘speed up BDD with parallel cucumber‘ we have seen the basic setup of parallel-test, scenario execution and reports aggregation.

In this post, we will see how to handle flacky scenarios by re-running them with parallel cucumber.

if you got existing project add this to your cucumber.yml report logger as a new profile

This will created ‘cucumber_failures.log’ with all failed scenario which we can use it for rerunning.

You can also add another profile to generate html reports of each cucumber process.

Now, you can run your features in parallel using that profile

This will run your entire features into 10 different processes and logs failed scenarios in the ‘cucumber_failures.log’ file.

Now that, we got ‘cucumber_failures.log’ file with all failed scenarios. We can use that file to re-run failed cucumber scenarios. like this

You can put all things into one Rakefile i.e deleting reports, running in a parallel and re-running failed scenarios. 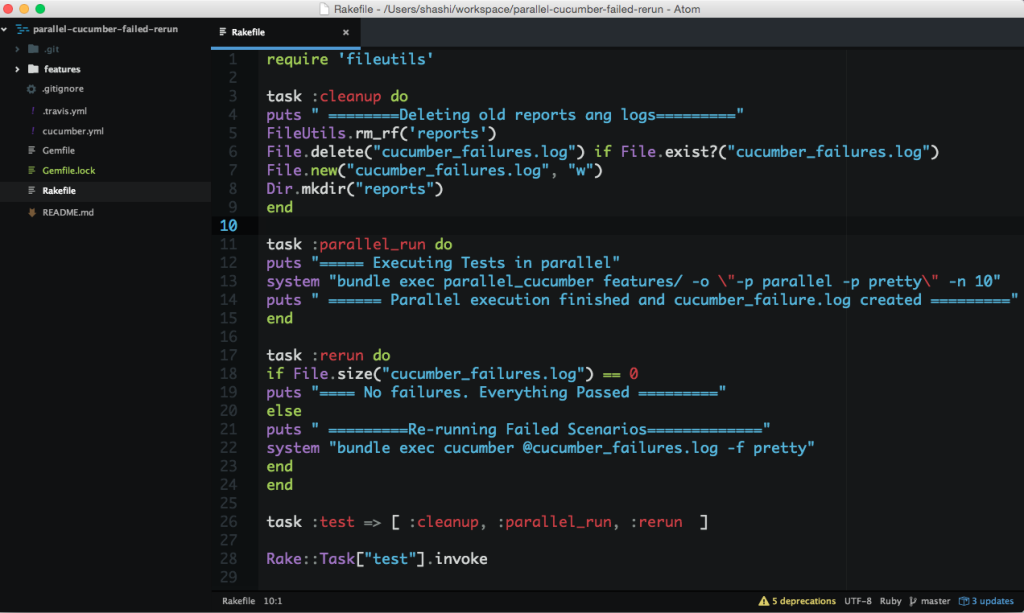 This task runs features in parallel and create ‘cucumber_failures.log’ file with failed scenarios.

This task will rerurn only failed scenarios.

This task will combine everything in one.

You can start from simple demo on Github