Xcode 10 has dark mode so it would be interesting to see how it looks like to set up Xcode Server from scratch. We will create a blank application with unit and UI tests targets in Xcode 10, we call it Xcode10-XcodeServer.

As before, we can see “Servers & Bots”  tab in the Xcode Preference. We can setup Xcode Server using local Mac or another Mac. We need to select the Mac and Integration user. See the GIF below to understand the process of enabling Xcode Server in Xcode 10.

Once, we enable the Xcode Server then we will get a macOS notification saying Xcode Server is ready and we will an icon on the top with the status of Xcode Server as shown below. 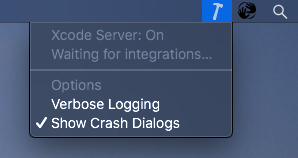 Now that, we have setup Xcode Server which is waiting for integration.

Once, we have enabled Xcode Server then it needs to be added to the local Xcode so that we can create a bot. As usual, it can be done from the Xcode Preference -> Account Section by adding new Xcode Server. We have to provide canonical hostname of the Xcode Server machine and details of the user to run integrations.

Now that, we are all set to create a new bot for our blank demo application Xcode10-XcodeServer

Once we have opened Xcode project for our app, we can easily create a bot to build and test the app. It’s the same process as explained in the previous blog post for Xcode 9 and Xcode Server here

The above GIF shows an entire process of creating a bot and running integration.

Well, looking at the Xcode Server from Xcode 9 and Xcode 10, there isn’t anything changed drastically apart from the dark mode. There were no any words about Xcode Server in this year WWDC 2018, there might be various reasons for this but some of the Xcode release notes have shown that there are some issues with the server

With the acquisition of BuddyBuild, Xcode Server development seems to be slowed down, this might be an alarm bell for the existing Xcode Server users. It would be interesting to see what Apple and BuddyBuild are doing together to solve CI/CD issues for iOS app development in the near future. Let’s wait and watch the future of Xcode Server.