Along with some great features, Bluepill has some limitations which are as follows

Hopefully Bluepill team at LinkedIn will put some effort to fix these issues in near future.

As per the current Bluepill usage info  on github, we have to build the app scheme with XCTest using xcodebuild ‘build for testing’ action so that we can have derived data to work with Bluepill. We can then pass ‘app_path’, ‘scheme_path’ ,  ‘output_directory’  and other flags to bluepill to run tests in parallel or use use JSON files configured with those flags and pass it to bluepill. We can make this process more dynamic by combining this with Fastlane which is a tool for automating iOS development tasks.  In this post, we will see how to configure Bluepill to run with Fastlane !

Let’s get started and create a New iOS project in Xcode as ‘Single View Application’ name it as ‘Bluepillar’ with just Include UI Tests box checked. Do not check the box for Include Unit Tests or Use Core Data for this demo. 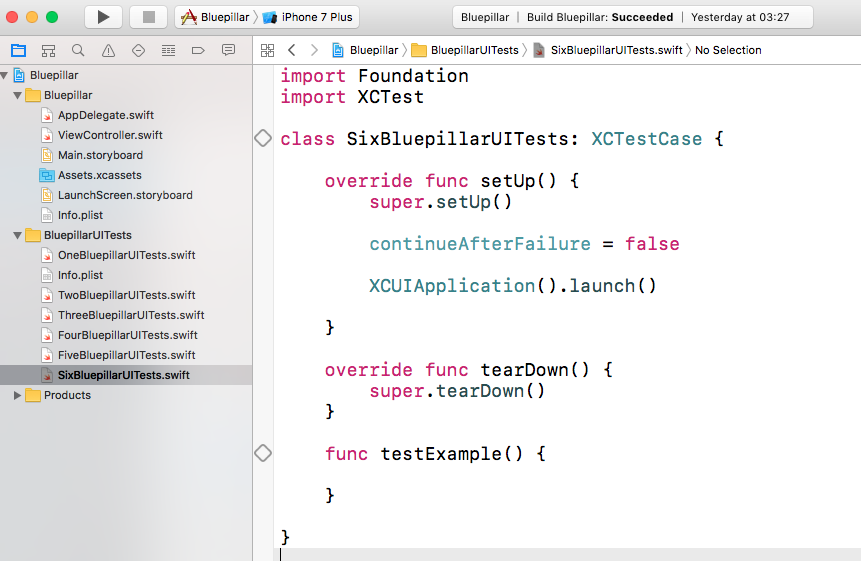 Now that, we have six tests which are doing the same things but it doesn’t matter for the parallel test demo.

but this is not enough as we need another binary ‘bp’ for which there is no homebrew formula yet, hopefully maintainers will add it soon ! so for now we will install it manually using below steps.

Now we have both binaries in the PATH and can be accessed from anywhere.

We can install fastlane using Homebrew, Installer Script or Rubygems as per the fastlane documentation here, Let’s install it using Rubygems for now

There is a fastlane Bluepillar plugin which I recently wrote to make the configuration bit easier. We can get this plugin by running

This will create a file called Pluginfile  inside ‘fastlane’ directory which we should commit in the source control. The setup will look like this:

Now that, we have Xcode project with 6 XCUITests and fastlane installed. Next thing, we need to configure a lane to run XCUI tests in parallel using Bluepill.

First we need to build our scheme with XCUTest using fastlane scan to generate derived data so that we can pass it to bluepill. We have a scheme ‘Bluepillar’ which has XCUITest target and we will generate derived data in the project itself inside ‘bluepill’ directory. The scan setup will look like this

Next, we will configure bluepillar plugin to take some parameter like ‘app‘, ‘runner_app_path‘, ‘output_directory‘ and ‘scheme_path‘ which are required. We can also pass optional parameters like ‘num_sims‘, ‘runtime‘ and ‘device‘. All other parameters will be taken as default from bluepill. So, blupillar setup will look like this:

At this stage we have all the required setup and we need to configure Fastfile  with it. Let’s create a lane called ‘test’, add following code to Fastfile

Now that, we are all set to run the test. Let’s execute this lane

This will first build the app and then execute tests in 3 different simulators. It looks like this:

Nice ! It will also generate reports per simulators as well as final report in the JUnit xml format.

As you have just seen, how awesome it looks like running the tests in the multiple simulators but there are certain things we should remember

WWDC 2017 is coming soon, let’s wait and watch future of these tools. Hopefully Apple chaps won’t break these tools which are nothing but wrappers on native Apple developer tools or reverse engineered original frameworks/tools. Look forward some enhancements and speed in the future releases of the Bluepill.